I never have any problem maintaining CPEs in the past until now, with the new portal. It is a disaster. I have no idea whether I have any CPEs coming due now.

Have anyone test the new portal before it was released in the wild ? I can't believe the professional organization, such as (ISC)2 will let this happen.

Can we rollback to the old CPE portal for now until all issues are resolved ?

Our apologies for the difficulties you're encountering on the portal.  Unfortunately, we cannot revert back to the old portal since there was a lot of work done on migrating CPE data in our new member database, work being done in parallel to the new CPE portal.  We will definitely make improvements to make the interface more user-friendly, and implement changes based on recommendations and suggestions we've been receiving from members.  I know we will eventually reach our goal of getting this portal to where we envisioned it to be.

My sincere apologies again.  All I can do is to offer assistance to you at this point, and really hope for your continued support.  You can reach me directly at eparedes@isc2.org and I will be more than happy to help you out in your submission.

Just to let you know I am experiencing the exact same issue.

"Satisfied" on the member home page and then on CPE submission page I have no Certifications to actually add CPE's to....which should not be the case.

I hope this sort of thing subsides soon. It's very frustrating.

@HTCPCP-TEA Please send me a DM or email to avance@isc2.org with your primary email address and ID number and I will look into your account for you.

Thank you for posting about this. The error you are receiving is with our team and is being worked on. In the meantime, you can reach out to membersupport@isc2.org for assistance to ensure that your CPE's get tracked.

I will also be merging this thread together with a longer thread on this topic, this way all posts on this issue are together and updates can be made in one place.

I wanted to provide a quick update to all those who have participated in various posts about the CPE Portal. All posts around issues with the CPE Portal have been merged together to keep like-posts together and give us a central point to provide updates.

If you are running into any issues with your CPE's, we ask that you reach out to membersupport@isc2.org and our team can assist you further.

Lo and Behold! After a month of darkness, the error message 119852647 has been resolved and the CPE Portal is appearing again in my account. Unfortunately, since I passed the end of my three year cycle, the old transcript is closed so it can't be modified. Some of the automatic submissions from ISC2 are incorrect - they have the wrong titles. Through date mapping, it will probably take me at least a few hours to understand which CPEs were recorded and which are still missing out there somewhere in the ISC2 member support ether. What I will do if I get audited I have no idea as there are symposiums listed that I didn't attend but videos I watched don't appear along with some security magazines.

Also the navigation box ended up looking like this 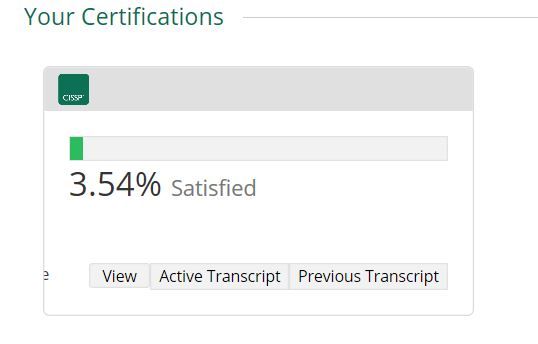 No, that is not a cropping error. It actually looks like that. I keep thinking that I have ended up in Developer hell. That's the place where security professionals go in their nightmares. Where is the quality assurance? Security professionals understand that such coding errors indicate a much larger problem. It's like the musicians who demand in their contracts a clause about only green M&Ms in their dressing rooms. That's to make sure that someone actually cares about the contract terms. When nobody cares about the small stuff, one must wonder what is happening in regards to the big stuff.

I went back and checked and over the years I have spent upwards of $70,000 between getting my CISSP certification and keeping it. That's not an insignificant sum. I feel that ISC2's current CPE portal mess is damaging to the organization's brand reputation and consequently to my investment in this brand. I used to drive a Volvo. But in my geography, when that company's quality assurance and customer service declined, I stopped buying Volvos and switched to BMW. It is very tough to do that with ISC2. Unfortunately, they know that. However, I can ensure that all my new certifications are elsewhere. I don't understand how an organization that is supposed to be all about ethics could ethically cause such distress to its members?

I ask again, where is the ISC2 Board in this unfortunate CPE portal debacle and why aren't we hearing from them?

The internal server error cleared this morning. But the transcript is not
correct and it's going to take me hours to understand what CPEs have been
credited. Also, the image that appeared showed me that there are still some
developer issues - this is how the page actually looks. Not a cropping
error.
Reply
0 Kudos

Thanks for letting me know that you are having trouble too. As a member
outside the USA I started to imagine I was all alone in my misery.
Reply
1 Kudo