According to the report, 82% of breaches involved the human element, which encompasses phishing, stolen credentials, misuse, or error. The researchers also found that supply chain breaches were behind 62% of intrusions last year. "There are four key paths leading to your estate," Verizon writes, and lists them: "Credentials, Phishing, Exploiting vulnerabilities, and Botnets. All four are pervasive in all areas of the DBIR, and no organization is safe without a plan to handle each of them." And while the rise in ransomware features prominently in the report, Verizon notes that "ransomware by itself is, at its core, simply a model of monetizing an organization's access."

Community, What do you think? Do you agree?

Oh I can agree with the increase even if it appears to be a bit lower than predicted. Problem is we have so many good technologies to stop this before it takes hold this shouldn't be seen at all. Even a basic risk analysis shows how much protection costs versus the probable cost of paying the ransom.

Agreed and this stuck out to me: 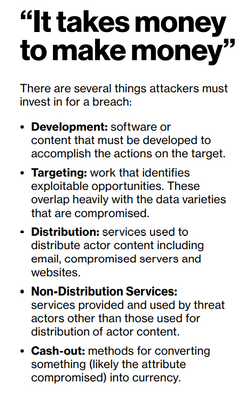 On a macro scale, the long term solution seems to be discovering ways to break the value chain (page 21). Any interruption along this process would make the breach pointless if they couldn't cash-out with the data.