Only way to watch "Solutions Summit" webinars is with Flash

Was surprised to find that the only way I could watch e-Symposium and Solutions Summit webinars was by having the Flash player installed.

Seems like (ISC)2 should not be promoting the use of Flash which is insecure and being phased out in most browsers at the end of 2020. 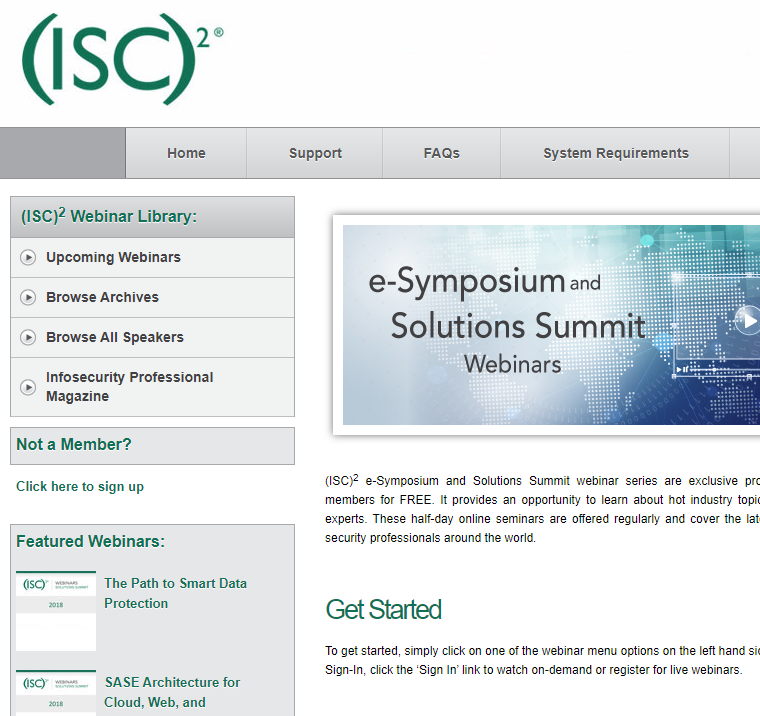 @AndreaMoore Would you kindly forward this one to the Education folk?

Yes, we are working with our webinar partners to address this issue and will ensure our quality webinars will be delivered securely. Stay tuned for more information.

As of today, Flash is now officially unsupported by its manufacturer.  Many security-conscious organizations blacklist unsupported software, so a growing portion of the membership has lost the ability to watch the Solution Summits. The next milestone comes on Jan 12th, which will be even more impactful.

I suppose the positive note in this is that (ISC)² uses multiple vendors for its CPE offerings, with a collective diversity in requirements (Flash, HTML5, in-person, pdf, etc.) so there is a built-in fault tolerance in our ability to earn CPEs.

Has there been a solution to the Adobe Flash issue?

Just to add, there is still no way of accessing the videos at the e-symposium, due to Flash being deprecated earlier this month.

It is quite disappointing that a site that is partnered with ISC2 has failed to properly prepare and move away from Flash, given the vast amount of warnings given by multiple vendors.

2020 (ISC)² Solutions Summits are now available on BrightTALK. All Webinars are now conveniently hosted in one place. Click here to view 2020 archived sessions and register for upcoming webinars to earn CPE credits! https://www.brighttalk.com/channel/13159/

More information is posted on the blog: https://blog.isc2.org/isc2_blog/2021/01/isc2-cybersecurity-webinars-available-on-demand-on-brighttal...

I should have put money on that being the solution.  Although (ISC)² deserves a bit of grief for allowing the clock to run out, I do give them props for finding a better solution than the Dailian, China Municipal railway.

The railway found that their dispatch systems broke Jan 12th, when they were completely surprised to learn the well-advertised Flash time-bomb went off.  Their solution?  Find a pirated copy of Flash server and old version of Flash client.

But wait, it gets better...

They chronicled their journey (Chinese, English; original deleted by the GFWoC) much like one would a spy thriller, blamed the failure on "American company Adobe’s comprehensive ban of Flash content." and ultimately celebrated their own success thus:

During more than 20 hours of fighting, no one complained and no one gave up. The slim hope motivated everyone and turned into the fuel to push forward. In the solving of the Flash malfunction, the depot displayed true initiative, innovation, and brilliance.

Anyone else heading for the liquor cabinet about now?

Thanks for the update. Only one question, what about the certificate/module history I used to have in my Blue Sky Broadcast profile ((ISC)² e-Symposium Webinar)?  On BrightTalk, I had to create a new account and start from scratch. All my Webinar sessions done in 2020 via live.blueskybroadcast.com are not in BrightTalk.

Keep in mind that live.blueskybroadcast.com is not working any longer.

Is there any fix for this issue?

Thanks and Best Regards,

We moved 2019 and 2020 Solution Summits over to the Security Briefings channel here: https://www.brighttalk.com/channel/13159/

They were moved in January so you can scroll down to "4 months ago" and find them there.

If you need anything else, let me know! Happy to help!